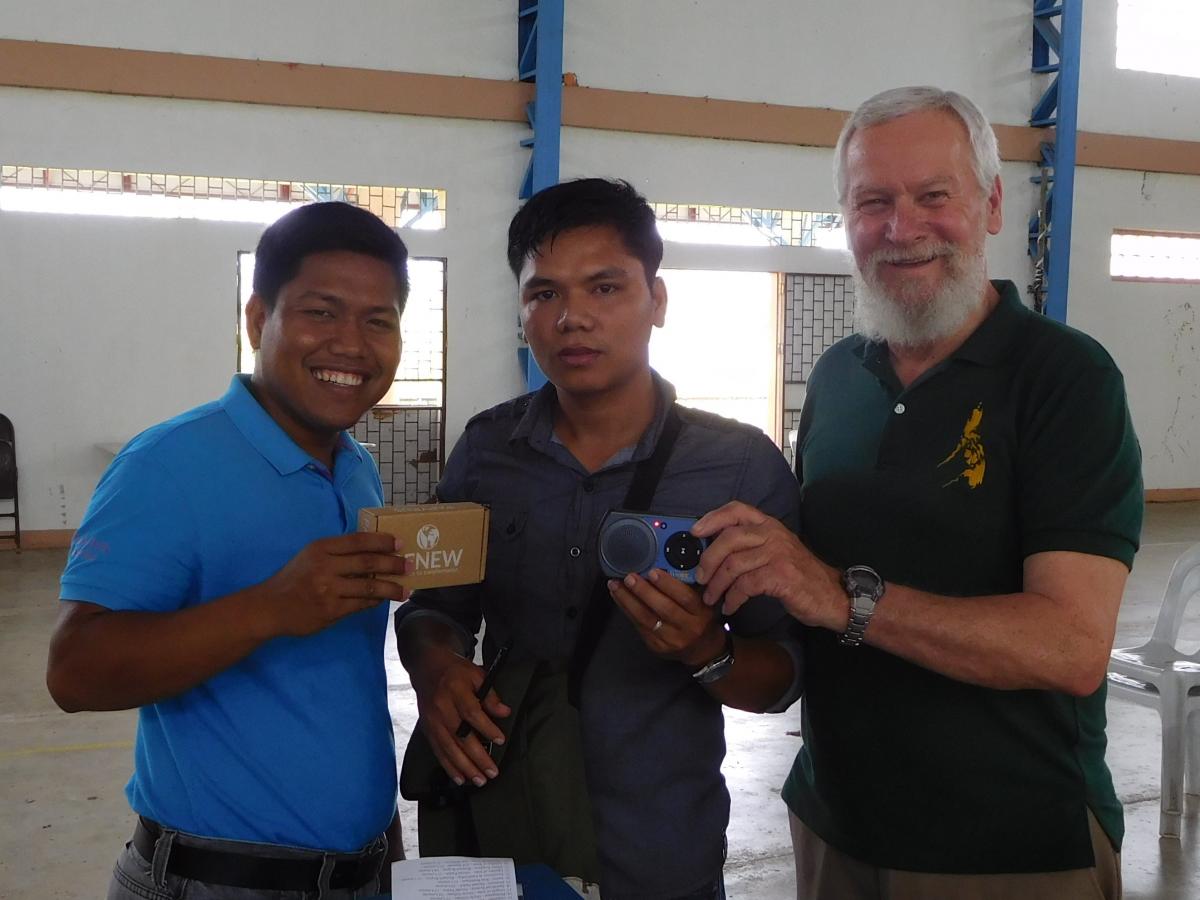 The Solar Mission to distribute 2,000 Solar Players throughout the islands of the Philippines is well underway.  Almost one third of the money has been raised and distributions will take up most of the rest of the year to complete the task. At the same time, we are still getting requests from South America and Africa for additional solar players to help fill the needs there.

In March, Brian Garnett took 150 players to distribute at a church conference with over 1,500 in attendance. The players were given to church leaders. Brian reported that there were 150 very happy people and 1,350 that were very disappointed. While Brian was on an earlier trip, a congregation contacted Sunset about getting a player to a preacher they knew in Cebu. Brian was able to reach Manuel Daliwa and another preacher at a McDonald’s. Since that time, Manuel has planted two churches in the mountains and baptized many using the solar player to help teach.

In April, Sunset held a meeting for ministry partners who are all working in different ministries throughout the Philippine nation. Among the group were long-term missionaries, Filipino’s, and representatives from ministries that have been laboring for years through short-term trips and long-term relationships. Many of the participants were encouraged to see an effort being made to unite the church in a way that will empower them to strength themselves against the forces of evil that they all face. In the discussions it was mentioned that by uniting under the common teaching from Sunset, it will help to unify the 600+ churches already working to stand strong.

Be praying for one of the key distributions planned for this summer. In July, hundreds (possibly thousands) of Christians will meet in the Philippines for one of the largest meetings of Christians on the islands. Many representatives from Sunset will be there and teach, including Ed Wharton, Chris Swinford, as well as Brandi and Penny Kendall and Brian and Betty Garnett. The hope is to distribute a large number of the solar players at that meeting. These will be put into the hands of preachers from around the country and possibly even into the predominantly Muslim parts of the country where so few churches exist. Pray that the meeting will not be hindered by weather or by any of the many ways Satan may work to disrupt the spreading of the Light into the darkness.

Barry Smith, from the Madison Church of Christ in Alabama and director of World Mission Africa, recently visited Sunset in Lubbock . Barry has been distributing Solar Players in Africa since Phase I in 2014. Through his connections, Barry has distributed solar players into many different countries where Sunset has not been able to visit. These include Senegal, the Gambia, Morocco, Guinea, Togo, Benin, Namibia, Angola, Lesotho, Swaziland, Uganda, the Democratic Republic of the Congo, and the Central African Republic. It has become an indispensable tool for him as he works to train leaders throughout the continent. Barry said, “I’m going to start encouraging every Christian I know to make a contribution to buy one solar player that can then be distributed on the African continent... We’re planting this seed using these devices. We can’t multiply ourselves that many times but we can certainly multiply the Word with the use of these devices.” There will be more from our interview with Barry on social media in the weeks to come.

During the Philippine conference in July, Sunset will distribute our 10,000th solar player. Words cannot express how humbled we are to be a part of planting the Word of God with each of these players. With the majority of these players still in use today in groups of 5 or 10 or 100 spread throughout the world, we can only praise God for the increase that He is bringing and will continue to bring. Thank you to everyone that has been a part of this process of making sure that no one is left in the dark apart from the Light of the Gospel. We will have more on this milestone for our ministry as we continue to report.

We are still looking to add more churches as partners in this ministry. Many of you are individuals that have given over the years. Please let us know if we can come and share how your congregation can be a part of the Solar Mission. Please contact us for how we can work with you to include your church in this mission.