THANK YOU
THE GOAL OF 2,000 SOLAR PLAYERS REACHED AND FINAL STAGES OF DISTRIBUTION DRAW NEAR

For the second year, you have responded to this incredible opportunity to help the Kingdom of God grow. With just under three months left in the year, you helped us reach the goal of funding 2,000 solar-powered audio players to be delivered to Ethiopia, South Sudan, Kenya and Nigeria. Three-quarters of the solar players have already been delivered and are in use. The rest will be delivered in two remaining trips, including the delivery of the solar players to Ethiopia with the Sunset materials and the Bible in Amharic.  We will report on this milestone around the first of the year.

How Effective are Solar Players After 18 Months?

We receive letters, emails and facebook messages regularly from those who have been blessed by your gift of a solar player to help them in their ministry and spiritual development. For this update, we wanted to share a portion of one of these letters.  It comes to us from Trokon McGee, one of the ministers for the Smythe Road Church of Christ in Monrovia, Liberia. Liberia was one of the countries in Phase I of the Solar Event. You will remember that we were limited in the number of solar players we were able to get into Liberia due to the Ebola crisis that plagued the country last year. This letter is an effective witness to what God is doing through you to help these ministers of the Gospel.

In June 2014, the solar player came to Liberia. Many preachers both urban and rural have benefited. I can still recall on the 8th June 2014 at the Smythe Road Church of Christ a workshop was held where Bro. Chris Swinford ... preached and explained the use of the solar player. He along with Bro. Maxwell J. Whea, Minister of the Smythe Road Church of Christ, encouraged preachers that the device be used for its intended purpose. That day about 80 preachers received a device each and joy filled the entire sanctuary.

I was one of the beneficiaries of the Papyrus in June of 2014. And it has been really helpful for my studies. The device is simple and easy to use and does not require an advanced education to know how to work it. Additionally, the solar charging component of this device makes it even better for “Rural Ministers” and even those in urban settings that do not have electricity. I usually place the device at my window when I need to charge it. It spends all day at the window and by evening it is charged. I really don’t allow it to go completely dead before charging it.

I use the solar player for Morning Devotion. When I awake in the morning, I play few scriptures from the Holy Bible section and then I pray. Still in the morning while I prepare for work, I switch to the songs section and sing along which puts me in a better frame of mind for work. 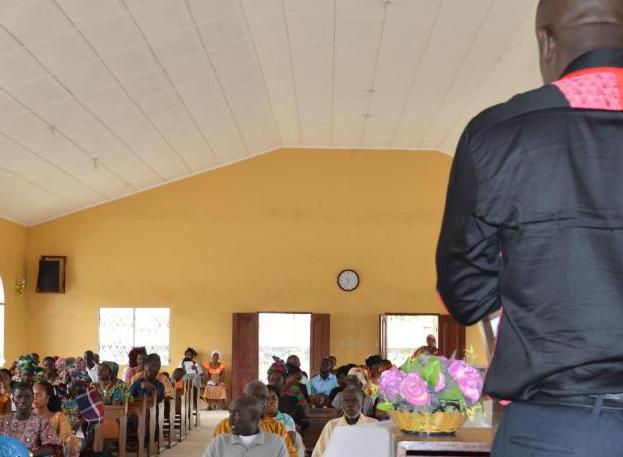 The solar player is a very good Research Tool and I use it to research on many Biblical topics.  Some of those topics include: the History of Christianity, Excellence in Leadership and Distinctive Nature of the Church amongst others. The solar player has been an aid in my lessons preparation. During the course of the week when I am preparing my sermon for Sunday worship or for Youth Bible Class, I use the solar player. Every Saturday the youths at the Smythe Road Church of Christ meet to study the word of God and to plan activities for the Ministry. The last Sunday has been allotted as Youth Service. On the last Sunday the youth at the Smythe Road Church of Christ take part in all aspects of the worship including preaching, leading song and the Lord Supper, praying amongst others. The solar player has been very helpful in preparing these young men serve the Lord.

It has been over a year since these devices were distributed. I have been curious to know how effective and useful this device has been to others who received it and what impact it’s making in their lives and the Church. So I decided to speak to few beneficiaries.

I first encountered Bro. Joshua S. Gargar, a devoted Christian youth, song leader and Bible Class Teacher at the Smythe Road Church of Christ. He is also a 2008 graduate from the Liberia Bible College, Liberia.  I asked him do you still have the solar player and if yes how is it working for you? He immediately took the Papyrus from his bag and showed it to me. And he replied “I am really enjoying the solar players especially the songs section. It has helped me learn new songs and I am teaching those songs to the larger congregation. Not only that, but the lessons are quite simple and easy to be understood”.

I then spoke to Bro. Maxwell J. Whea, Minister of the Smythe Road Church of Christ. On his part he thanked Sunset International Bible Institute for remembering preachers in Liberia. He said it was timely and has really help preachers in Liberia especially those in rural communities. Continuing Bro. Whea said that this device has gone as far as to communities near the borders between Liberia and Sierra Leone. The Ministers are organizing an event for next year that will bring together most of those preachers (rural and urban) who received a solar player. It is my hope to ask them on the usage and effective of the solar player in their ministry and to share their stories.

We anticipate lives continuing to be affected by this ministry for many years to come. Thank you again for giving this gift to so many that are spreading the Gospel in some of the most remote places of the world. In the coming months we will tell you more about the next development in this worldwide ministry as it continues to be an effective tool as we train to spread the Kingdom.