UPDATE 8/10/2014: Sasha Kolbzev has been released and is among the refugees living in the church’s building in Mariupol.

As most are probably aware, since late February there has been a great deal of turmoil in southeastern Ukraine.  Beginning with the Russian annexation of Crimea and then progressing to the formation of the People’s Republics of Donetsk and Lugansk the citizens and Christians of this part of Ukraine have endured a lot. These conditions have had an effect on SIBI’s associate school in Donetsk. 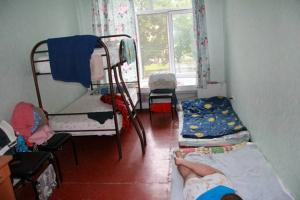 The war in Ukraine with its unstable and dangerous conditions forced us to close down UBI two weeks earlier than normal.  This also caused us to have to cancel the graduation ceremonies.  Jay Don and Mary Lee Rogers (Jay Don is the director of the school) left Donetsk the middle of May.  Because flights had been canceled out of Donetsk, they had to fly out of Dnipropetrovs’k’k.  They are presently in Canada doing what they can to keep up with the staff, students and multiple needs. It was very hard to make the decision to leave but the Rogers knew that their presence might put the UBI staff and neighbors in danger.  There was a lot of anti-American propaganda being put out by the Russian separatists.

The original desire was to go ahead and finish the term and have graduation in August but as most of you know, right now Donetsk is one of the hot spots where heavy fighting is taking place. At this point we are working on several possibilities for the restart of UBI.

Our hope is that the fighting will end soon with peace as the victor.  Satan certainly reared his ugly head in trying to stop the spread of the Gospel in an area of Ukraine where so much good has been done.  Of course our brothers and sisters there continue to keep the faith and spread the Word in spite of what is happening.  The separatists are against the freedom of Religion, holding that the only true church is the Russian Orthodox Church. Because of this a number of terrible things have been happening:

People are frequently calling and asking how things are in Ukraine and asking what they can do. Here are some things each one of you can do.

If you wish to help and the funds are for UBI, or to help staff and students, the funds can be sent to Sunset:

If you choose to help with funds and they are for benevolence purposes, send the funds to: